An earlier form of evaporative cooling, the windcatcher, was first used in ancient Egypt and Persia thousands of years ago in the form of wind shafts on the roof. They caught the wind, passed it over subterranean water in a qanat and discharged the cooled air into the building. Modern Iranians have widely adopted powered evaporative coolers (coolere âbi).[1] 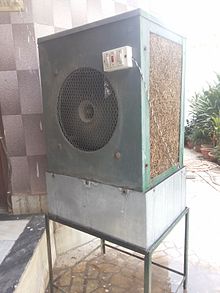 The evaporative cooler was the subject of numerous US patents in the 20th century; many of these, starting in 1906,[2] suggested or assumed the use of excelsior (wood wool) pads as the elements to bring a large volume of water in contact with moving air to allow evaporation to occur. A typical design, as shown in a 1945 patent, includes a water reservoir (usually with level controlled by a float valve), a pump to circulate water over the excelsior pads and a centrifugal fan to draw air through the pads and into the house.[3] This design and this material remain dominant in evaporative coolers in the American Southwest, where they are also used to increase humidity.[4] In the United States, the use of the term swamp cooler may be due to the odor of algae produced by early units.[5]